BUTLER – Choctaw County Sheriff Scott Lolley has officially filed a lawsuit against members of the Choctaw County Commission for not taking action to construct a county jail.

Filed in Choctaw County Circuit Court on July 15, the lawsuit names as defendants the county commission as a whole, along with each member individually, including Chairman Michael Armistead and Commissioners Tony Cherry, C.D. Ruffin, Horace Mosley, and Gary Doggett. 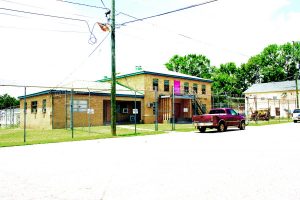 The lawsuit comes nearly two years to the day when the Choctaw County Jail was officially closed by order of State Fire Marshall Scott Pilgreen due to significant structural and safety issues caused by age and major water leaks that had occurred over time.

The text of the suit cites Alabama Code 11-14-10 which requires the county commission to “erect courthouses, jails, and hospitals and other necessary county buildings” and gives the commission the authority to “levy a special tax for that purpose”.

The lawsuit seeks action on three counts, including a Writ of Mandamus ordering the commission to follow applicable statutes and fund the construction of a new jail immediately due to ‘dire circumstances’.

Count two seeks a Declaratory Judgement ordering the defendants to comply with all applicable statutes immediately or face fines of $10,000 per month for each defendant until the construction of the new county jail is commenced, with those fines to be paid from the commissioners’ official bonds.

Finally, the lawsuit seeks a Permanent Injunction and asks that the court retain jurisdiction in the case “until the completion of a new Choctaw County Jail”.

In petitioning for court intervention, the lawsuit also references the closure of the jail by the Fire Marshal in October of 2010, during the administration of Sheriff James Lovette. According to reports in the Choctaw Sun at that time, the fire marshal’s report cited issues with smoke detectors, the lack of a code-compliant fire alarm system, outdated fire extinguishers, inoperable closed-circuit camera monitors, an inadequate second-floor exit, and electrical appliances being used by inmates in the cells, among other violations. The county commission was also cited for issues related to locks on cell doors, improper waste containers, and the presence of improperly stored combustible materials. Thirty-three inmates were removed from the jail at that time and housed in Clarke and Pickens counties.

The structure was reopened following a fire marshal’s inspection in January of 2011.

Plumbing issues also led to the temporary closure of the jail in 2015, just after the beginning of Sheriff Scott Lolley’s first term of office. Repairs, costing about $98,000, were made at that time, but foundational problems remained.

The lawsuit states that for more than 11 years, the building has “continued to fall deeper and deeper into a state of disrepair to the point of literally falling to pieces”.

Since the closure of the jail, inmates have been transported to Clarke County and now Washington County for housing.

The lawsuit filed last week referred to the ongoing cost of that transportation, stating that “for 11 years, the Choctaw County Commission has failed to adequately maintain the jail and for two years has allowed the county to be totally without a jail costing the taxpayers hundreds of thousands of dollars needlessly spent transporting prisoners back and forth to other county jails and courts.”

Following the closure in 2019, the commission voted to hire engineers to determine whether or not the jail could be repaired to ensure safety for inmates and jailors. Engineers with Lathan Associates Architects P.C. and Structural Design Group recommended that the commission consider a new construction as a more feasible solution, rather than attempting to make the significant repairs necessary to reopen the existing structure and bring it into compliance with federal and state codes.

In September of 2019, members of the commission discussed visiting jail facilities in other counties to determine what may be needed for a new construction in Choctaw County. At that time, the commission also discussed options for the construction, as well as potential funding to pay for it.

According to reports at that time, members of the commission visited at least two facilities, but those visits reportedly ended at the onset of the COVID-19 pandemic.

Following state-ordered restrictions brought on by the pandemic, the commission opted to move their meetings from their usual conference room to the large courtroom in the Choctaw County Courthouse for social distancing purposes, but regular meetings did not take place on several occasions during 2020, due to the use of the courtroom for court proceedings. The commission relied, to a large degree, on special called meetings to handle county business, but no definitive action about potential jail construction was discussed during those meetings.

In March of this year, Lolley submitted a letter stating his intent to file a lawsuit against the commission if they did not take action. In the letter, Lolley’s attorney, Eric Tiebauer, said that Sheriff Lolley had “instructed him to work out, in an amicable fashion, if at all possible, several issues that are endangering the public and preventing him from fulfilling his duties…”

In April, District Attorney Spencer Walker spoke to the commission, informing them that he would take action against them, according to state law, if they did not proceed with actions to provide a jail. Walker referenced state statute 11-14-15, noting that if the county commission failed to levy a tax to erect or repair a county jail when necessary, the persons composing the county commission would be guilty of a misdemeanor.

Following Walker’s statements, the commission voted unanimously to support a resolution in favor of petitioning the legislature to put a measure on a ballot for voters to decide whether or not to enact an ad valorem tax to build a jail. A proposal for a ballot measure, which was first considered by members of the Choctaw County delegation in Montgomery, did not make it to the floor of the legislature for a vote in the 2021 session.

In early May, members of the commission viewed proposed plans for a new jail construction, including a rendering for a 43-bed facility, potentially costing about $6.5 million, and a 75-bed jail, which would cost about $7.6 million.

Last month, the commission obtained a geotechnical engineer’s report concerning the stability of the ground beneath the current jail structure. The report said that most of the settlement of the structure had likely already occurred, but the building would have to be shored up from beneath, if any additions were made that added weight to the building.

On July 6, the commission opted to seek estimates for the cost of renovations to the old jail. Those estimates are still pending.

Officials have also recently been weighing several options for temporary housing structures, but have not yet made a decision about the issue. The lawsuit states that one of the options being considered was not in keeping with national standards for housing prisoners.

The Sun-Advocate sought comments from the county commission about the lawsuit, but Chairman Armistead said that they could not yet comment on the record due to legal issues.

It is not certain when the case will be presented in court.

The commission will be represented in the lawsuit by County Risk Services through the Association of County Commissions of Alabama (ACCA).