Local responders answered the call to a fire on Murray Road, just off New Hope Road, at just before 10 p.m. Wednesday night. The fire engulfed one structure and quickly spread to another mobile home that stood nearby. Firefighters from New Hope, Needham/Land, Toxey, and Lusk responded, along with the Choctaw County Sheriff’s Department. The structures were unoccupied at the time of the fire.

The fire is the latest in a series of fires set by a suspected arsonist in that area, and investigators have been examining evidence found at the scenes. 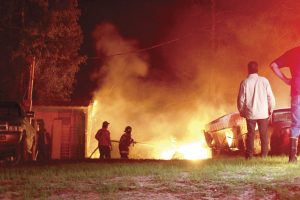 Firefighters work to put out a fire on Murray Road on Wednesday night. (Photo by Dee Ann Campbell)

Previous fires that are involved in the investigation have been published in several recent issues of the Sun-Advocate.

The Choctaw County Sheriff’s Department is now offering a $1500 reward for information leading to the successful arrest of the suspected arsonist responsible for the fires.