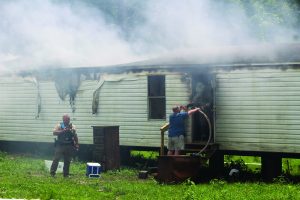 Firefighters, along with Deputy David Dunn, work at the scene of the fire. (PHOTOS BY DEE ANN CAMPBELL)

MELVIN – Firefighters from several local departments are currently responding to a fire that has gutted a mobile home on Melvin Cutoff Road. The call for response came in at just after noon today (Saturday). The Choctaw County Sheriff’s Department also responded to the scene. Witnesses on the scene told the Sun-Advocate that the trailer belongs to Simone Turner, who was not at home at the time. One individual is reportedly being treated for health issues at the scene but was not injured in the blaze. No other information is available at this time.