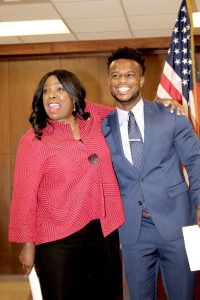 LINDEN – “I believe time is of the essence to find common ground on issues that matter most to those back home,” U.S. Rep. Terri Sewell told a group that gathered in the Marengo County Courthouse in Linden on Wednesday.

Speaking to a group of about 40 attendees, Sewell discussed a variety of issues during a ‘Congress in Your Community’ town hall meeting, including healthcare, infrastructure, and trade. Those issues, she said, were vital to her constituents in the Black Belt region of Alabama.

Leading the agenda for the Town Hall meeting, Marengo County Commissioner Fred Armistead thanked Sewell for her work on behalf of the district.

“Thank you for what you have done for us, what you continue to do for us, and what you will do for us,” Armistead said. 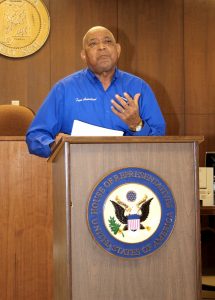 Following an introduction by Marengo County Coroner John Scott, Sewell discussed her efforts as U.S. Representative for the 7th district of the state, efforts that she said were part of her desire to uplift the communities that she serves as well as the individuals who live there.

“Government is a conduit,” she explained. “What really matters is how we help each other. We are all interdependent. When you uplift a community, you have to uplift everyone in that community.”

Sewell touted her office’s efforts to facilitate the public’s access to the federal government, particularly in regard to benefits and services.

“Last year we helped to get $2.6 million in retroactive benefits for veterans,” she said, listing other efforts to help her constituents gain access to benefits. “We stand willing and able to help you.”

With the Democratic party currently holding the majority in the House of Representatives, Sewell, who is serving her 5th term, said that she now holds leadership positions on a list of committees, including her position as Vice-Chair of the influential House Ways and Means Committee, overseeing a long list of issues including healthcare, Social Security, trade, and taxes.

Sewell said that, among the issues most affecting her district, the issue of healthcare is one of her priorities. She discussed her efforts as cosponsor of the Stabilization Act to shore up the Affordable Care Act, admitting that changes were needed to address the high cost of premiums and deductibles. Following passage by the House, the Stabilization Act is now being considered in the Senate, Sewell said.

“We are fighting for more money to subsidize, so that the cost of premiums is not so expensive,” she explained. “If we are going to truly be in charge, the first priority is the stabilize the Affordable Care Act.”

According to Sewell, another priority is to lower the cost of prescriptions. Her statement drew a reaction of support from those in attendance at the meeting.

She explained that, in the U.S., costs for medications like insulin are significantly higher than in other nations because those nations, like Canada, are negotiating drug prices. If such negotiations take place in the U.S., she said, Congress needs to ensure that any savings goes to consumers who purchase the medications.

Sewell said that she has been fighting to protect access to healthcare in rural areas, including seeking ways to help keep rural hospitals open and stable.

During a question/answer session at the end of the meeting, Demopolis Mayor John Laney again brought up the subject of hospitals that are struggling to survive. Sewell said that changes must be made in the way disbursements are paid, so that rural hospitals can survive.

Referring to the hospital in Butler, Sewell said that Choctaw General was able to remain financial stable because of the facility’s designation as a Critical Access Hospital, allowing a higher rate of reimbursement from Medicare and Medicaid. Other rural facilities were struggling because of low reimbursements for services.

“We are making progress on it,” she said. “We are working together on a fix.”

Sewell continued her discussion of healthcare by promoting the need for Alabama to expand Medicaid. The state was one of 14 that opted not to expand the program during the implementation of the Affordable Care Act during the Obama Administration. At that time, the federal government would have provided federal dollars for the expansion for a temporary period, with the states continuing to pay for the expansion after the federal allotments ended.

Sewell said that she, along with Ala. Sen. Doug Jones, had been pushing the new Medicaid Expansion Act that would give states a 100% match on the expansion for the first three years.

Other issues discussed during the town hall meeting included proposals to increase the federal minimum wage. Sewell said that she continues to push for a tiered increase that is tied to the cost of living in each area of the country.

“I’m differing from other Democrats,” she said, adding that the current push to move from $7.25 to $15 within five years – known as the ‘15 in 5’ plan — was not feasible for rural Alabama.

“I am about commonsense solutions,” she said. “We have to increase the minimum wage but phase into the $15. Some in my party disagree with me.”

Sewell said that her plan would ensure that small businesses are not crunched and people don’t lose their jobs because of it. She said that 10 more votes are needed to move the ‘15 in 5’ proposal to the floor of the House.

“I’m going to tell them that you have to do something for rural Alabama and small businesses first,” she said.

Sewell said that she is also leading efforts to stop the proposed 25% tariff on imports of automobiles and auto parts.

“We sent a bipartisan letter (to President Trump) saying ‘Do not use Section 232 (of the Trade Expansion Act of 1962) to impose tariffs for national security’,” she said.

The provision gives the president authority to impose import restrictions of certain products if the U.S. Department of Commerce believes it jeopardizes national security. The Trump Administration used Section 232 to impose tariffs on steel and aluminum and is considering using the same rule to levy tariffs on automobiles and auto parts.

Sewell highlighted Alabama’s auto manufacturers, saying that imposing such tariffs on auto parts would dramatically affect their industry. Specifically, she discussed the impact tariffs would have on the Mercedes plant near Tuscaloosa.

“Some Mercedes parts are imported,” she explained. “A 25% tax would mean it costs more.”

She added that increases in cost for manufacturers are passed on the consumer in higher costs for products.

Sewell referred to the new U.S.-Mexico-Canada Agreement, or USMCA — dubbed ‘NAFTA 2.0’. The agreement would increase the mandatory amount of auto content that has to be made in the NAFTA region (U.S., Mexico, and Canada) from 62.5% to 75% and requires that 40% to 45% of all auto content be made by workers earning at least $16 per hour, and eliminates subsidies for agricultural goods that the nations sell to each other. The agreement also includes provisions affecting digital trade.

“I’m in favor of free trade, but, more importantly, fair trade,” she added. “I don’t want to displace American workers.”

The Congresswoman brought up what she calls one of the most important priorities for rural Alabama and the nation as a whole, improvements in infrastructure.

“It’s not just roads and bridges, although we need help with that,” she said. “But it’s also water and sewer. There should be a standard of living for all Americans.”

Sewell referred to the lack of adequate water and sewer infrastructure in some Black Belt counties, including Lowndes County in particular. She added that infrastructure improvements should include better water, sewer, and broadband internet access.

Sewell said that President Trump had walked away from the discussions because of the ongoing investigations involving alleged Russian collusion.

“It’s important to put party aside to negotiate on things that matter,” she said.

Among other issues, Sewell also touted her support for paid medical family leave, saying that she had recently met with Ivanka Trump about the issue.

“We have the Family Medical Leave Act,” she said, explaining that the Act allows for medical leave in certain circumstances, but employees taking such leave do not typically get paid for their time off.  “The President’s daughter wanted to talk to me about paid medical leave. She focused on maternal care – paid maternal leave. I said I wanted comprehensive paid medical leave.”

Sewell described her own experiences with her father’s illness, stating that her family had been blessed with good insurance and community support, while other families are not so fortunate. Paid medical leave, she said, would alleviate struggles for families who cannot afford to take time off to tend to a family member who is sick.

“In too many families, one person is left paying the bills,” she said. “Paid leave needs to be also for dads who want to stay home, or what about adoption?”

Sewell later said that the details of any proposed paid medical leave legislation, including how it would affect small and large businesses, have not yet been ironed out.

Nearing the end of her presentation, Sewell talked about investigations involving Russian interference in the election process in the United States.

“Russia did interfere in our election,” she reported, “and they will continue to do it. But you are not going to see me on the news talking about impeachment. I will talk about bread and butter issues that matter in the Black Belt.”

She added that citizens in her district could make their voices heard at the ballot box.

“You have a role to play – Vote,” she said. “Your voice is your vote. That’s how you make a difference in our society.”