SILAS – A Silas man was killed last night when the tractor he was driving was struck from behind by another vehicle.

George Franklin Mason, 57, was pronounced dead at the scene following the accident that occurred at around 8:35 p.m. on Saturday, June 1.  Mason was driving a Ford farm tractor along U.S. Highway 84, about a half mile from the Mississippi state line near Isney, when he was struck by a 2006 Chevrolet Trailblazer, driven by David Maurice Mosley, 56, of Pennington. 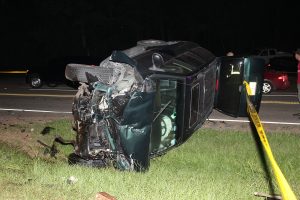 The 2006 Chevrolet Trailblazer driven by David Maurice Mosley overturned during the crash.

Mosley was not injured in the crash and was reportedly wearing his seat belt at the time. His vehicle overturned following impact.

According to information from the ALEA Troopers, alcohol may have been involved in the accident, which is still under investigation. 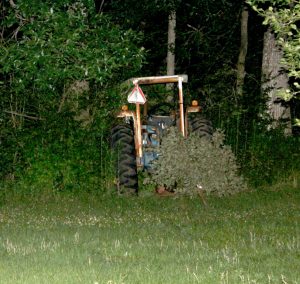 The Ford farm tractor driven by Mason is pictured near a wooded area off the roadside following the accident. (Photos by Dee Ann Campbell)